For sailors or the idly curious…here’s how the trip North from Key West to Ft. Myers Beach went. I originally intended to sail further North towards Boca Grande and jog South a couple of miles to Cabbage Key; but I ended up jumping into Ft. Myers Beach at Moss Marina to wait out a northerly gale and regroup from the 24 hour bash into the wind and waves. Lots of noise, lots of diesel fumes. You can imagine. Just FYI, the word “awesome” herein may be sarcasm. For truly enjoyable things in this section of the log, I generally use other words.

I have removed the reference to my solid elimination schedule. I have retained the notes on fluid intake and outtake for scientific purposes. 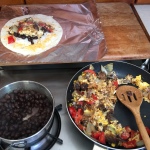 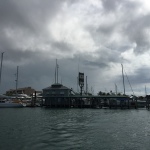 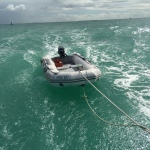 1528  Shrimper on horizon crossing me W to E. Drinking a Water.

1633  @14.5mi NNW (350T) of KW NW Channel marker, crossed a 75yd stretch of different water. Reflection looked lighter. No capillary action? Noticed a few spots of small bubbles, could have been marine life. No change in wind or SOG during or after AFAIK 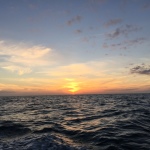 1818  Most. Amazing. Burrito. Ever. Managed to get grill lit, turned down Med-Low…as low as I thought would stay lit. put foil pkg on. No idea how long. Let cool. One corner of bottom near center of grill (shifted from center due to motion) was barely charred. Overall: magnificent.

2000  Thought we were getting into some smoother water for a sec where we could make better time. But no. Occasional large bow splash but thankfully no major cockpit spray. So far. Heading 354T. COG 351T @ 5.2kt. Speed varied greatly last little while. Down as low as 3.9 with sets of waves. Just took largest one yet. Time to put up iDevices etc. soon. (“Large” still = less than 4 ft, I think.)

(Probably less than 3 ft. Does moonlight make waves look bigger or smaller? I believe they look bigger looking toward them than looking abeam as they pass. What looked like an impressive wave becomes… Meh.)

2020  Returned iPad, cheese, crackers, cheese knife and board, 2 beer bottles inside. Got water and Zoom. 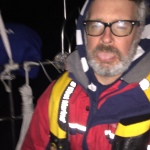 2100  We must be in a more confused sea about now. Down to 2.4 for a sec during wave set!!! Heard a tinkling sound, worried me a sec. It was water running aft off the side decks!! Wind may actually be a bit lighter but still same direction. 1021mb. Finished another water.

0102  a little more pounding of course

0900  Burrito. May pass on the coffee. Diverting to San Carlos Bay and ICW (vs. Boca Grande). Gotta be better than this. Slightly less pitching, much more rolling and yawing. Maybe a hair more speed. 4.5 kts SOG 039T. Wind may have veered. On the nose, but waves on port bow. They have definitely been 3’+ max for a couple of hours. Moderate whitecaps, some small crests breaking. Sky clear, a few cirrus.

1000  Quick to neutral: passed over goddamn crab pot. Realized we had been on locked heading. Corrected back to Track and up to 2300 RPM.

1022  12mi. line. Just replaced Spot batteries after sending manual “Ok” msg and seeing red power led. Have we been transmitting track? Been happily blinking green all night. Getting 5+ kts. for a minute. 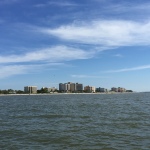 1300  Entering San Carlos Bay, depth reading strangely shallow…consitently 5-6′ in what should be deeper water. Following shrimper in. They alternate between going my speed and slowing down for operations. Ugh.

@1330  While getting ready to pass shrimper, vessel under sail whistled at me. Discovered anchor hanging off bow! No doubt the cause for the false depth readings (hanging in front of transpoder). Re-lashed and continued into Matanzas Pass. 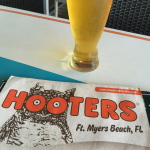